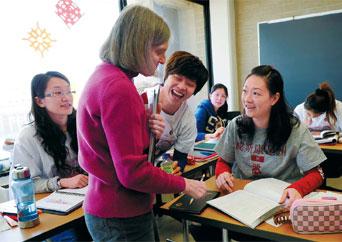 Chinese athletes who participated in the London 2012 Olympic Games have stated that learning English has played a significant part in the progression of their careers.

Olympic medal winners, such as sailor Xu Lijia and gymnast Li Xiaopeng, recognise the benefit of verbal communication in English when competing at an international level.

In 2002 Xu Lijia, aged 14, was involved in a scoring protest with judges in an international sailing competition; due to language barriers she was unable to accurately describe what happened on the water and consequently lost her position.

Having learnt English over time, she was able to give an interview to the BBC during the London 2012 Olympic Games, following her gold medal win and her fluent English has made her a favourite of the Chinese media.

Li Xiaopeng, a gymnastics gold medalist, feels that learning English challenges the Chinese stereotype of being “medal machines”, because people are able to gain a deeper insight into their careers and lives.

An interesting technique used by the Chinese athletes is the “New Words For Today” strategy, whereby words are written on a whiteboard, which helps them learn and memorise sporting terminology.

Several of the Chinese athletes taking part in the 2012 games have found that being able to speak English benefits their lives outside of sport too.

Huang Xuechen, a synchronised swimmer, plans to use her English skills after her retirement from the sport, to help her to “find a new job or apply for college overseas.”

Chinese athletes have earned language qualifications from esteemed British colleges and universities, such as the University of Cambridge, University of Nottingham and Trinity College London. These certificates are recognised by several universities and employers in many countries.